Camp Mack is closed to all public use for hunting season during the following dates:
Monday – Saturday from October 1st, 2022 – January 16, 2023
and on Sunday November 13, 20 and 27
Night riding is permitted on all days no less than 30 minutes after sunset!
Additionally, bikes are not permitted in the main camp area near the pavilions, pool, and camp sites.  Signs have been posted at the boundaries of the no bike area.
Signs have been posted at access points. 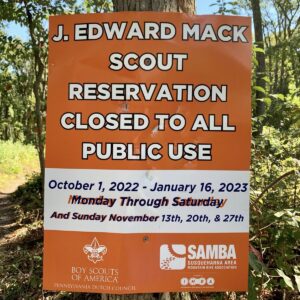 The best trail map is available on Trailforks:  https://www.trailforks.com/region/j-edward-mack-scout-reservation/
Camp Mack Trail Map
Download the Pennsylvania region, or update your regional data if it’s not current, for the most up to date map.

Since the beginnings of mountain biking, Camp Mack has been a keystone in the area known to many as “Brickerville”.  Famous for its rocks, roots and rough terrain it was a natural spot for some of the areas earliest mountain bike races featuring cross country, trials and downhill events. These Big Timber Races introduced many people to the sport and helped make Camp Mack a go to spot for great riding.

Early 2000’s, a forestry stewardship plan was being put into action to start the harvesting of standing timber on the property and a permit system was put into place that would charge mountain bikers a $50 per year to ride on the property. After a couple of years of the PA Dutch council administering the permit system and logging taking its toll on the trail system, SAMBAcontacted the PA Dutch Council. At the first meeting SAMBA was notified the council was considering closing the property to all non-scouting activities, citing increasing conflict with different user groups and difficulty with the permit system. Coming out of that meeting SAMBA was able to present a plan that would provide the Pa Dutch Council with solutions to these issues. The first benefit to the council was the transfer of the administration of the permit system from the scout office in Lancaster to Green Mountain Cyclery along with a cost reduction from $50 to $25 a year. The second benefit was SAMBA would provide communication to the greater mountain biking community to reduce conflicts. The third would be the redevelopment of the trails lost to timber harvesting, following best practices established by the International Mountain Bike Association. The plan was approved and implemented with approximately 100 passes issued every year and many trails re-established with hundreds of volunteer hours cementing the relationship between SAMBA and the Pa Dutch Council.

After years of service to the Scouts, SAMBA, with support from IMBA, was able to negotiate the elimination of the permit system and enter into a Volunteer Trail Stewardship Agreement that allows for the continuation of SAMBA support for years to come. 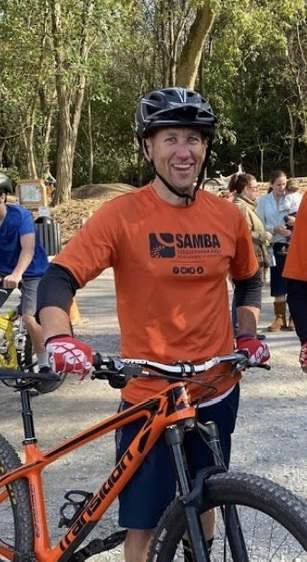 SAMBA welcomes Matt Knepper to Board of Directors

We couldn’t be happier to announce that Matt Knepper has agreed to join the Board as our new Secretary! Matt brings a wealth of experience to the Board through his work as the Trail Director for Camp Mack and co-Trail Director for the Ephrata bike park. Matt was...

Camp Mack is closed to all public use for hunting season during the following dates: Monday through Saturday: October 2, 2021 –  January 17, 2022 and the following Sundays: November 14, 21 and 28

Howdy, We realize that Camp Mack has been a part of the mountain bike culture in Central Pa. for decades and we were all devastated by the sudden closure last year. After several months of negotiations with the Pa. Dutch...

SAMBA’s Trail liaison and Board members met with a representative from the Pa Dutch Council and had a positive and open discussion. Both parties are optimistic that we can resolve the issues that lead to the closure. We were able to gain a better understanding of the...

Camp Mack will be closed to mountain bikes until further notice. SAMBA is working to resolve the issues and we've had some good discussions with the Land Manager. We are optimistic that we can reach a new arrangement in the coming months. Kindly do not ride at the...

NOMINATIONS OPEN! for SAMBA Board and Committee positions

Howdy, We are excited to announce that nominations are now open for Board of Directors and Committee positions with SAMBA! If you have the passion, dedication and skills to help with these positions please be sure that you are nominated. Nominators  and nominees must...